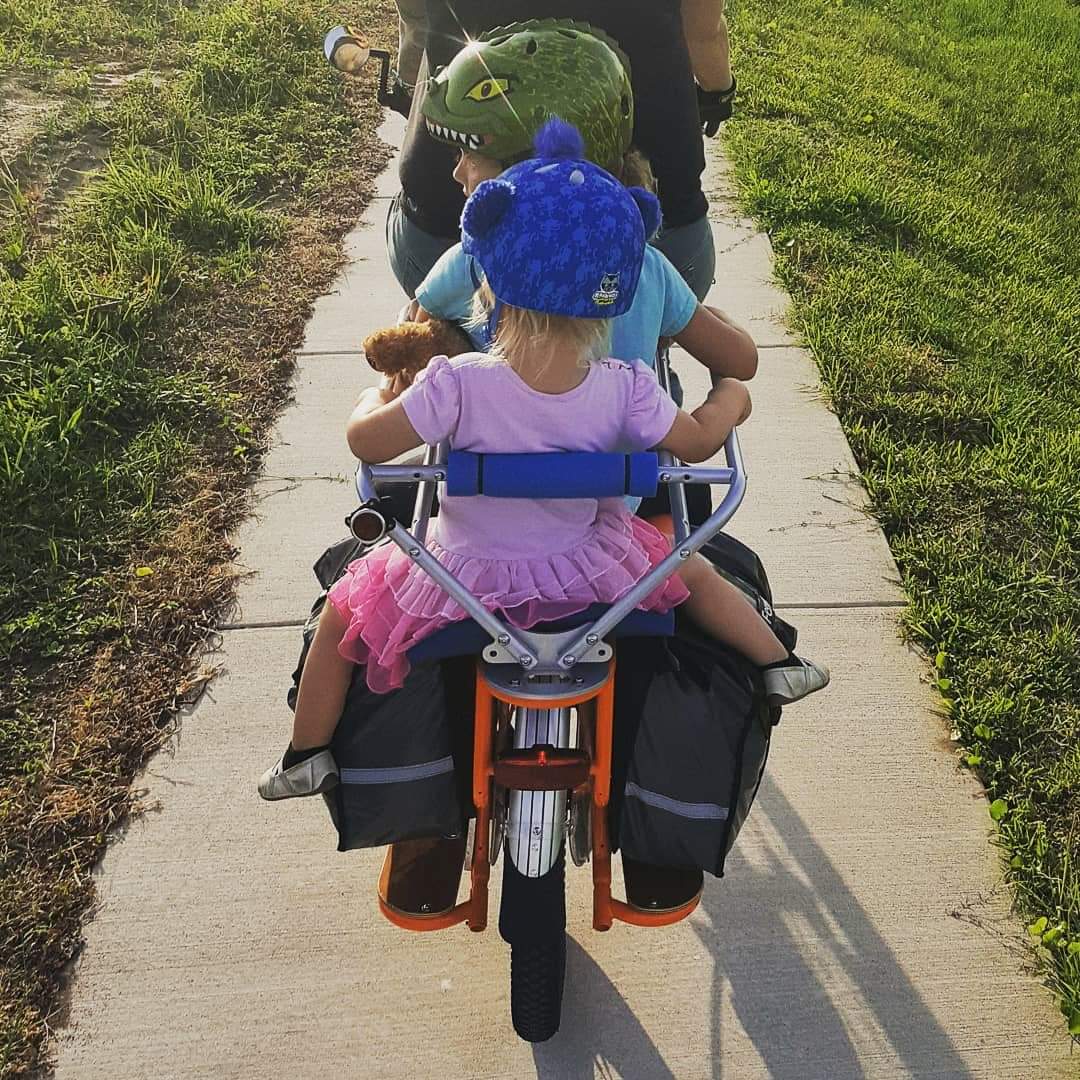 What have I gotten myself in to? When I came up with the Great Idea of going car-free for the month of March, I did so with the naïve belief that our mild, Gulf Coast winter would be safely behind us. I envisioned bright, crisp mornings, watching for dolphins with the girls while we rode along the seawall to our respective schools and work. I closed my eyes and pictured the wonder on my kid’s faces as they connected with the environment and engaged with every migrating bird along our route. I would arrive at my office invigorated for a new day of sciencing and full of pride in my reduced carbon footprint which I would certainly document photographically for all to see (because #onelesscar #greenmom, amairite, y’all?) It was a Great Idea. I expressed my Great Idea to my husband, Seth. He said, “What a Great Idea! I will also go car free!” We patted ourselves on the back for being such good citizens-ofEarth/parents/bike-shop-owners.

That was the beginning of February. Since I spoketh the Great Idea out loud, our weather has been s**t. Seriously. Wildly vacillating between balmy tropical rainforest and Arctic tundra winter. If it wasn’t foggy and raining, a literal Arctic Blast (whoo those meteorologists are witty) was howling 25 miles an hour out to sea. As the days ticked by and each ten day forecast looked more like a chronological list of the ten plagues, I began to get nervous. The memory of the mommy side-eye we got one sub-seventy degree morning at drop-off haunted my thoughts. Maybe I could wait until April to birth this Great Idea! No sooner than I had made this executive decision did Seth remind me, “It’s almost March! Aren’t you just so excited about your Great Idea?!” He was genuinely excited. Mostly because he enjoys enduring hardship in the name of adventure. But also because he knows I’m a bit of a fair-weather cyclist and he wants to see my Pinterest-worthy Great Idea shake hands with Dosa Reality. And the reality of bike commuting is that it requires some logistics and a bit of gear if you plan on doing it on the reg.

My commuter bike, “The Boss”, is a RAD Power Bikes Radwagon, a cargo bike that can haul both of my kids on the back and lots of other stuff—trust me, I’ve gotten very creative with bungee cords in the name of carrying All The Stuff. The girls sit on the rear rack, inside of an aluminum frame called a caboose, that keeps them from tumbling out when they fall asleep (it happens!) I have saddlebags that attach to the rear rack as well as a huge basket on the front of the bike. That’s where my enormous backpack, and sometimes our little dog, rides. The Boss is so boss because it is electric. With everyone and everything in tow, it’s still a breeze to pedal because of the electric assistance. It’s like being Lance Armstrong…but with electrical doping.

There are a lot of great solutions out there for people who commute in less than ideal weather. There are rain slickers and layers and visors, but my set up, especially because of the kids, calls for more than that. Rain suits on both girls seems like a hassle so I am researching a way to put a canopy on the caboose that will spare them from the rain as well as the wind. The issue I see with that is that it may make my bike into a sail. Great when you are going with the wind, but just as our parents and grandparents hiked in the snow uphill both ways, so have I ridden into a 20 mile per hour headwind both to and from work.

March first came and went in a flurry of family stomach flu, Mardi Gras festivities, and the newly-three year old’s birthday party prep. Oops. But that’s okay because most people start new resolutions on Mondays. My amazing crossfit gym is constantly repeating “never miss a Monday!” Monday it is! But Sunday afternoon, a particularly icy northern started blowing through. Monday was rainy AND blowing a 20 mile per hour icy wind, so due to the lack of a plan or a backbone, I chickened out. So now I’m sitting here (at my stand-up desk, oh the irony) on Tuesday, March 5th renewed in hope that tomorrow will be the day I begin car-free March! And now that I have written it, I am accountable to all of you! All, probably, three-ish of you that will read these words! I’m pumped. I’m gonna figure out how to commute as if I don’t even have the option of a car. I will make it work, rain or shine (but hopefully mostly shine, right?) I mean, Wednesday looks beautiful…